The overall purpose for the introduction of Weather Index Insurance (WII) is to enhance the resilience of farmers who practice agriculture in arid and semi-arid land.

JICA’s first attempt to introduce WII was made under the Rural Resilience Enhancement Project (RREP) in 15 municipalities (or kebeles) in Oromia Region, Ethiopia. Unlike other traditional crop insurance products, farmers covered by this insurance would be able to get payouts only if the rainfall amount was below a certain level. Remarkably, nearly 1,300 farmers were registered in 2013 season, and the number of insurance contractors was almost equal to 10% of the total population in the project area. The JICA RREP Team plans to scale up the pilot project to reduce drought risk, as well as to promote more productive farming technologies and improve livelihoods in Ethiopia.

The key to success for the next step is to have a clear picture on how WII can be one of the effective risk management tools and share the experience and lessons learned in Ethiopia from this pilot project.

The impact of climate change can be detrimental to the livelihood and subsistence of Ethiopian rural communities. JICA and the Ethiopian Ministry of Agriculture conducted the Rural Resilience Enhancement Project (RREP) from 2012 to 2016 in order to enhance the resilience of rural communities in the Oromia and Somali Region against the impact of climate change, such as droughts. The WII pilot project was implemented as one of the three components of the RREP, which supported target communities to strengthen their resilience by (1) building small-scale infrastructures (i.e., water facilities, livestock market, and feeder roads); (2) constructing irrigation systems to extend irrigation agriculture; (3) providing Weather Index Insurance for those more vulnerable to agricultural disaster due to climate change. The RREP, however, cannot be regarded as a drought-response programme due to the capacity building and training it provided to communities in the Oromia and Somali Regions, specifically on how to enhance their resilience during times of drought. JICA provided technical assistance to pastoralists and agro-pastoralists that lived in low-rainfall, drought-prone areas and who depended on agriculture and livestock grazing to survive. 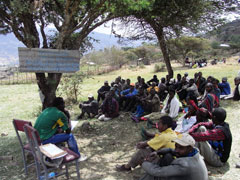 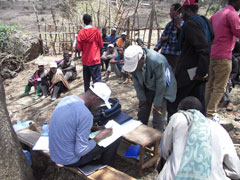 What is Weather Index Insurance? 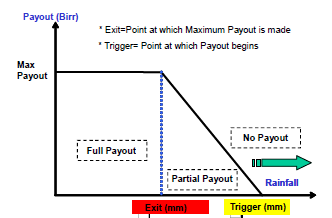 The concept of payout based on the amount of rainfall is shown in Figure 1. There are two technical terms that need to be understood to know the mechanism of WII payout. The first key term is trigger, the point showing rainfall amount at which payout begins. The other term is exit, the point that shows rainfall amount at which maximum payout is made. Between trigger and exit points, the payout amount is determined in proportion to the amount of rainfall observed.

It is important to note that the insurance is based only on rainfall data. A payout is not issued if crops die due to a different cause, or if the measurements show that there is sufficient rainfall.

Although the development and application of Weather Index Insurance is still in its early stage, especially in Africa, a number of theoretical advantages have been identified with its adoption as indicated in the following:

i) Reduced risk of adverse selection. Adverse selection can occur in agricultural insurance because farmers are more likely to buy insurance if they are at higher risk. Underlying this is an asymmetry of information, which places the insurer at risk. Therefore, the advantage of WII is that farmers subscribe based on terms, conditions, and payout scale for all farmers in a defined area, virtually eliminating the adverse selection problem for insurers.

ii) Reduced moral hazard. In traditional insurance, farmers may be able to influence the claim (by exacerbating physical losses) through their behaviour, a phenomenon referred to as moral hazard. With WII, farmers have no ability or incentive to influence the claim since payout is based on an independent and exogenous weather parameter that is completely independent from their behaviour.

iii) Eliminated field loss assessment. Loss assessment is a challenge for any crop insurance programme because of the need to mobilise a large number of skilled or semi-skilled assessors who should possess some agronomic knowledge. The ability of WII to make payouts without field assessment clearly reduces administrative cost by eliminating the need for assessors.

iv) Assured transparency. The assessment process in traditional products often leads to disputes between farmers and assessors due to the partly subjective nature of the loss adjustment process. WII contracts are based on the measurement of weather at defined weather stations (or satellite weather data) and, therefore, extremely objective and theoretically less likely to lead to disputes. It is, however, noted that basis risk sometimes becomes the real driver for dispute.

Adverse selection is a situation wherein an individual’s demand for insurance is positively correlated with his or her risk of loss (i. e., individual at high risk tends to buy insurance more), and the insurer is unable to consider this correlation in the price of insurance. This may be because of private information known only to the individual (information asymmetry), or because of regulations or social norms which prevent the insurer from using certain categories of known information to set prices (e.g., gender, ethnic origin, genetic test results, or pre-existing medical condition, the last of which amounts to a 100% risk of the losses associated with the treatment of that condition).

i) Basis risk. Basis risk is the most problematic feature of WII. It is the difference between the payout as measured by the index and the actual loss incurred by a farmer. Because no field loss assessment is made under WII, the payout is based entirely upon the index measurement and, therefore, can be either higher or lower than the actual loss.

ii) Data availability. Despite simpler data requirements, accurate and complete data sets are required for WII product construction and/or development. These apply to the historical records of the chosen weather parameter(s) for underwriting and pricing purposes, and for the recording of the parameter(s) for payout calculations during the period of insurance, as well as historical yield data to assess risk, and design and price the product.

iii) Capacity building and education for farmers and insurers. WII is a new concept for farmers and, therefore, any rollout of the product requires intense education programme to help them understand the principle of the payout system based only on one risk variable, that is rainfall. For insurers, this is a new type of insurance product, hence they require substantial technical assistance in construction of WII contracts and indexes. Extensive capacity building should also be conducted to enable them to undertake product construction on a sustainable basis. 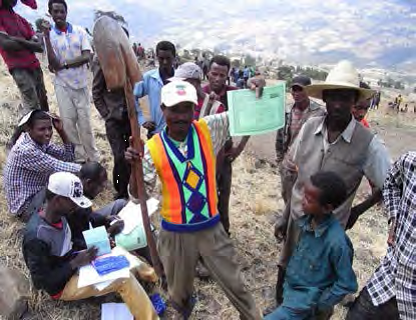 Phase I (2013): One of the reasons for high performance of RREP in Phase 1 could have been the mobilisation of development agents (DA). There were around 45 DAs and district (woreda) experts involved in the WII promotion. They mobilised local farmers and disseminated the information about WII at municipality (kebele) level. Although the DAs’ capacity was limited, they surely raised farmers’ awareness on the insurance. Therefore, the involvement of the DAs seemed to have contributed to the fact that more than 1,000 farmers signed up for the insurance during the first year.

In addition, the site selection process was an important factor for this high take-up rate. A situation analysis was conducted in the target woredas to select the specific target kebeles. Local people, such as the DAs, and the kebele chairpersons attended the situation analysis workshop, and they ranked and prioritised the kebeles for the introduction of WII. The Team, therefore, was able to identify the most drought-prone and, thereby, high-demand areas for WII by utilising such local knowledge. Thus, the farmers in the pilot project sites responded well to the WII promotion.

Phase II (2014): The number of insured farmers under Phase II implementation reached 5,623 as shown in Table 2. The take-up rate was approximately 20% of the total estimated number of farmer-households in the target areas. This take-up rate was much higher than that in Phase I (which was around 12%) and the total sum of insured amount was 572,500 birr or almost four times that of the last season’s 146,350 birr.

The average premium for Phase II was 102 birr, which was lower than the Phase I average premium of 114 birr. One of the main reasons for this was that new farmers who participated in Phase II tended to purchase only a single insurance as trial. Also, the farmers who purchased the WII at Phase 1 showed hesitation to buy again in 2014 season since there were no payouts during the previous year.

Follow-up Phase (2015): The number of insured farmers in the 2015 season increased by more than half of the previous year’s figure. Other indicators, such as take-up rate and the premium amount, in the 2015 season were also lower compared to corresponding figures of the previous season. The follow-up phase provided minimum input to promote the WII extension activity and the agricultural cooperative unions were trying to implement the WII promotion with such limited resources. Also, the start of the extension activity was delayed. These aspects seemed to have affected the WII sales performance during the follow-up phase.

According to the focus group interview carried out by the Project, all interviewed farmers expressed their willingness to buy WII policy in the following year too, and even non-insured farmers showed eagerness to buy the policy. One of the non-insured farmers explained: “I did not understand the benefit of WII fully during training time, but now I understand the benefit after getting information from other farmers and also by observing this year’s rain condition” (A farmer from Gale Fikelo). Anther farmer said: “I could not buy it because I did not have money at sales time, but I will prepare the money for next year.” (A farmer from Doyo Leman) 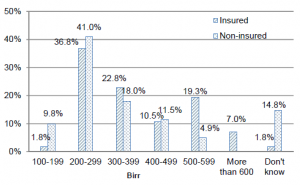 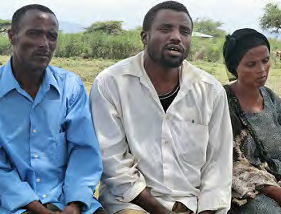 The pilot project concluded that the Weather Index Insurance (WII) can be an essential means amongst remedial measures in improving risky agriculture being practiced under meager and erratic rainfall, especially in drought-prone areas and, thereby, enhancing rural resilience against droughts.

Source: RERR Final Report, January 2016, JICA
Sample of brochure and banner hung in a venue for an awareness creation meeting

Towards a New Ethiopian Initiative with JICA for WII in Ethiopia

The Ethiopian Government with support from JICA is preparing to launch a new WII project in Ethiopia in 2019 in response to the results and recommendations given by the RERR project. It is called Index-Based Crop Insurance Promotion Project for Rural Resilience Enhancement.

The overall goal is the dissemination and management in a sustainable manner of index-based crop insurance for enhancing rural resilience.