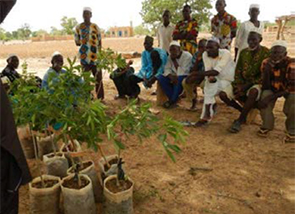 Tree seedlings for the agroforestry practice

Climate change affects people’s lives all over the world, and African people are no exception. In fact, they are vulnerable to climate change, especially those who live in rural areas, as many of them are exposed to the risk of natural disasters such as extreme droughts, floodings, and storms. They have little or no means to avoid such unpredictable events, and recovery from damages is also not easy for them.
Burkina Faso is one of the African countries severely affected by climate change. Although the Government of Burkina Faso had recognised the necessity to adapt and mitigate climate change, its capacity to respond was low. In addition, there was a concern that taking measures against climate change might obstruct national development. Therefore, an approach which can achieve economic and social development while addressing climate change was crucial.
To address this challenge, “Study on the development of low-carbon methodologies for rural development through the efficient use of local resources” was implemented by the Ministry of Environment, Green Economy, and Climate Change (MEEVCC), the Government of Burkina Faso, in collaboration with the Japan International Research Centre for Agricultural Sciences (JIRCAS) funded by the Ministry of Agriculture, Forestry and Fisheries, the Government of Japan, from 2014 to 2017.
The objective of the project was to achieve effective and efficient agricultural and rural development while contributing to climate change mitigation and adaptation through the development of methodologies and techniques which efficiently use natural resources and provide benefits to local communities.
After identifying the needs of people in Burkina Faso and building consensus with them, the three main activities were undertaken during project implementation, namely: (a) use of improved cook stove, (b) tree planting and agroforestry, and (c) installation of solar photovoltaic energy. Reduction in CO2 emission and profitability of these activities were evaluated quantitatively. 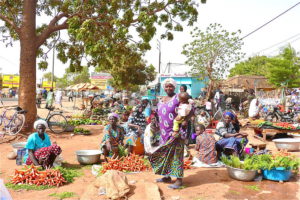 Burkina Faso means “the land of upright people.” It is a landlocked country in West Africa located at the south of the Sahara. Its people are renowned for their simple and hardworking national character. The main industry is agriculture and it generates around 20% of the country’s GDP*1. Burkina Faso is likely to be affected by extreme heat during the dry season that aggravates multiple fundamental problems such as poverty, shortage of water and energy resources, poor medical condition, etc. This is why climate change has been an urgent issue in Burkina Faso.
The Government of Burkina Faso did not have enough capacity to cope with the impacts of climate change. Moreover, other fundamental development problems were considered more important than addressing climate change. For these reasons, the project was implemented and aimed to establish methods to achieve sustainable development which can be effective for both rural development and combating climate change by taking a co-benefits approach.

2. What is co-benefits approach?

“Co-benefits” (combined benefits) refers to the profits generated in various areas as a result of a policy, a strategy or an action plan*2. Generally, a project introducing a co-benefits approach aims to produce two different profits simultaneously: respond to the needs of development and initiate measures against climate change, through adoption of policy, strategy, or single activity. 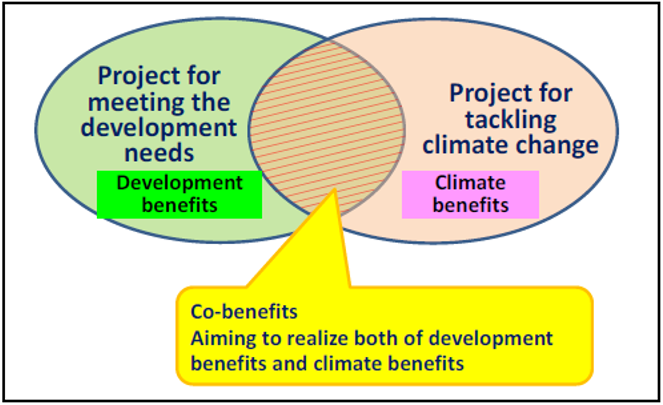 The activities to be performed in the project’s target area were defined using Farmer Participatory method. The aim for the adoption of such method was to motivate the project participants and raise their awareness on climate change by involving them in the process of action plan formulation. Among the various problems which were confirmed through workshops with local participants, the following were picked as the main problems to be tackled: lack of income generating activities and decrease in vegetation.
To solve the two problems, the following practices were introduced: (1) use of improved cook stoves to reduce firewood consumption, (2) agro-forestry practice to improve vegetation cover, and (3) utilisation of solar energy to supply water. The figure below shows the overall concept of the project. 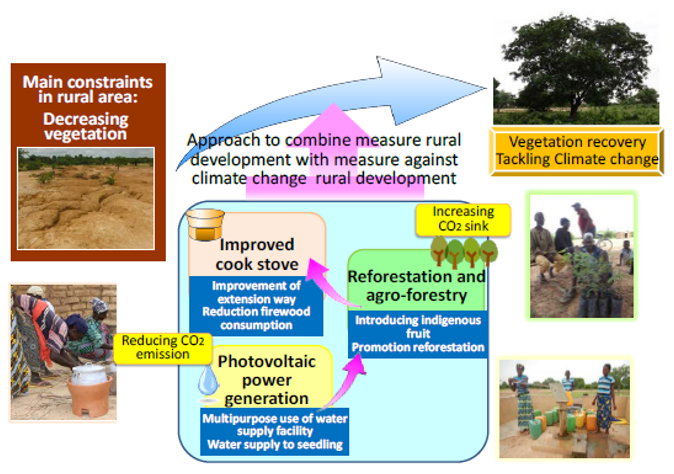 5. Three activities implemented under the project

The demonstration to introduce improved cook stoves was held. Among 150 households in a target village, 88 households (59%) purchased the stove and an efficient approach to disseminate the stoves was proposed. In addition, the methodology to calculate the quantitative impact of the reduction of CO2 emissions by introducing the stoves in rural areas was developed. 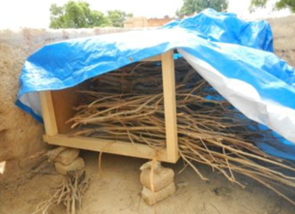 Tree planting and agroforestry using local fruit trees have three advantages: restoration of vegetation, improvement of living standards in rural areas, and climate change mitigation. In spite of the expected benefits, these were still at the experimental stage and hardly practiced in Burkina Faso.
In this activity, the project aimed to establish tree planting techniques and agro-forestry practices using indigenous fruit trees. The necessary practical training was provided to local farmers. Furthermore, an evaluation of the profit which they would get from their fruit trees was also conducted. 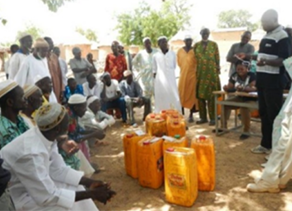 In the target area, which is Gu village in Kourwéogo province, people cannot cultivate during the dry season due to the shortage of surface water. Therefore, they have no income during this period.
Under the project, a solar photovoltaic (PV) system was installed in the existing drilling hand-pump facility. The system provides energy for the intake and distribution of water, which enables small-scale irrigated agriculture during the dry season. The village association started cultivation of vegetables for sale in the market by using the system and its economical effect was evaluated. Moreover, a quantitative assessment of the reduction of CO2 emissions by solar generation was conducted. 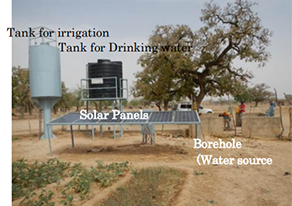 Pumping system by solar PV carried out in this study 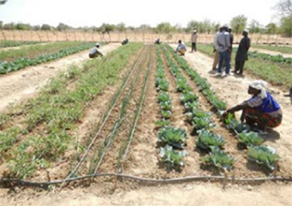 The guides, manuals and tools produced within the framework of the project for the training, scaling-up and awareness can be downloaded from the links below. These approaches can be applied to other countries in arid/semi-arid areas!

Reference: Promotion for Low Carbon Rural Development through Efficient Utilization of Local Resources for the Realization of Sustainable Development, JIRCAS

Note: The guidelines were produced by JIRCAS, funded by the Ministry of Agriculture, Forestry and Fisheries, the Government of Japan.