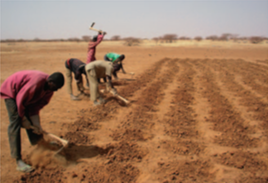 What are the roles of modern technologies and indigenous knowledge for addressing issues in developing countries? Some people may think that if you only have modern technologies, the problems would be solved without indigenous knowledge. Actually, that is a misconception. There have been cases in developing countries where new and advanced technologies were introduced but not sustainably maintained and thus the matter remained as it was. This fact demonstrates that modern technology alone does not always provide a fundamental solution to solve challenges in developing countries. Under this backdrop, traditional knowledge had attracted attention as alternative or supplemental solutions.
Traditional knowledge and technologies which have been fostered through trial and error over generations are assets in communities. They are easy to maintain, materials needed to operate them are available, and have the potential to be applied to other areas in a similar environment. For this reason, the Ministry of the Environment, Japan implemented a pilot project for transferring traditional knowledge and technology from 2004 to 2007 in Tokabangou village, Burkina Faso. During the project, traditional knowledge and technologies that have been utilised against desertification in neighbouring areas were identified, and four of them were selected and transferred to the residents of the target village. The lessons learned from the experience were summarised in the pamphlets introduced at the end of this article.

1. Outline of the pilot project

Sewing workshops were hold for technology transfer.
(Source: Ministry of the Environment, Japan)

The Framework of the Pilot Project (Source: Ministry of the Environment, Japan) 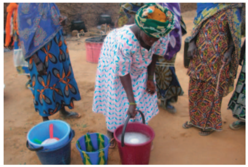 In order to secure ownership, it is important that the local residents are encouraged to identify and select the technologies themselves through traditional decision-making processes. In Tokabangou village, decision-making had been generally done during gatherings after prayers at the mosque. In the gatherings, older villagers’ opinions had tended to be given priority, and women had been basically excluded from the processes. Therefore, during the project, aiming to involve women in the decision-making process, women’s meetings were held in parallel with men’s plenary meetings during the project.

(iii) Improvement of technologies based on the local environment

Sometimes, it is needed to improve technologies in accordance with the physical and socioeconomic conditions of the local environment. Otherwise, newly introduced technologies will not make the expected impacts.

Cooperation with other international organisations, including NGOs, is a way to achieve sustainable dissemination of useful technologies. Also, it is important to encourage national/local governments to mainstream relevant activities or technical trainings to combat desertification.

The guides, manuals and tools produced within the framework of the project which can be used for training, scaling up and awareness raising can be downloaded from the links below. The approach can be applied to other countries in arid or semi-arid areas.