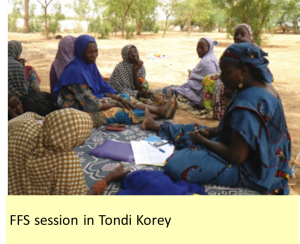 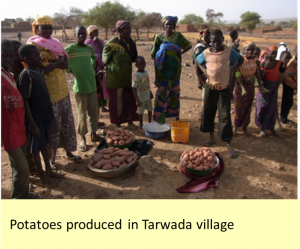 “Project on the Effective Utilisation of Reservoirs and Auto-Promotion of Local Communities in the Sahel” was a technical cooperation project by the Nigerian government and Japan International Cooperation Agency (JICA) conducted from March 2012 to December 2015. In this project, the reservoirs in the target area (comprised of Niamey Region, Maradi Region, and Tahoua Region) were repaired along with the establishment of cooperatives led by local residents for the maintenance and management of the reservoirs.

In addition, by implementing a technology transfer method known as farmer field schools (FFS), the following positive results were achieved: improvement of irrigation technology, empowerment of the participating farmers, and enhancement of solidarity among cooperative members.

1. Establishment of cooperatives for repair works and maintenance management of small reservoirs 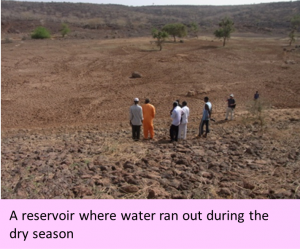 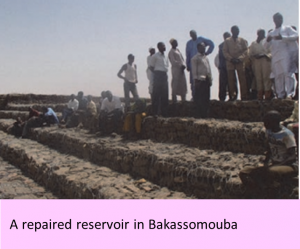 In the Sahel region of Niger, agricultural productivity is low due to unseasonable weather and lack of natural rainfall. Under such conditions, irrigation is an effective measure to achieve stable agricultural production. In the project’s target area, there had been several small reservoirs constructed by the government. But the local residents were less knowledgeable and experienced in utilising them effectively for agricultural production and improvement of their living conditions. They also lacked the know-how on maintenance management of reservoirs. Moreover, the dissemination and management system of the government was weak and so the reservoirs were not used efficiently.

As the result of the inventory survey carried out under the project, it was revealed that repair works were necessary in several small reservoirs, and this led to the repair of eight small reservoirs and excavation of wells in 14 sites.

For purposes of proper utilisation and maintenance, reservoir management cooperatives of local residents were established. And to capacitate the members to conduct the necessary operations to run the cooperatives by themselves, the project provided trainings on activity plan development; preparation and compliance with internal regulations; management of cooperative fund; holding of general meetings; and maintenance management of reservoirs like gabion repairing, dredging, and daily inspection.

Furthermore, in accordance with the cooperative members’ request, this project supported activities on agriculture, livestock, and tree planting that demonstrated the efficient utilisation of the reservoirs. Especially for the upliftment of agriculture, farmer field schools (FFS) was implemented in order to improve agricultural techniques that make use of the reservoirs.

2. Promotion of residents’ self-reliance through FFS 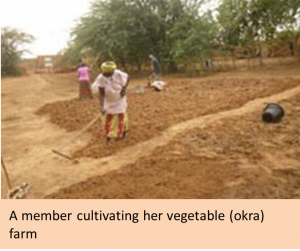 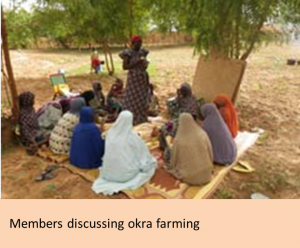 The farmers had never-ending issues related to agriculture. They said, “I would like to increase vegetable production by irrigation,” “I want to know proper application of fertiliser and pesticide,” etc. FFS aimed to resolve such issues by facilitating farmers’ groups composed of about 20 to 30 members to implement several comparative tests on crop/vegetable cultivation, through which they improved their agricultural skills. The farmers’ groups gathered once a week to have an FFS session about learning topics such as “Varietal comparison of lettuce using irrigation,” “Stems training techniques in tomato cultivation,” among others. The 2-hour sessions consisted of seven topics, and a sample programme of a session is shown in Figure 1.
Among all the FFS topics, agro-ecosystem analysis (AESA) was especially important. Members observed the growth of certain crops/vegetables in their farms, and made presentations on planting progress in front of all the members. Together, they analysed problems and considered ways to resolve these through group discussion. By observing the field regularly, the farmers became capable to detect problems like presence of pests at an early stage. Also, the FFS provided good training for assertiveness because the participants had many opportunities to make presentations and to express their opinions in front of group members. Moreover, group discussion during FFS sessions led to create locally acceptable techniques based on the knowledge and experiences of the members. In addition, FFS had an interactive recreation programme known as Group Dynamics wherein members enjoyed dancing, singing, and sharing of entertaining short tales or anecdotes. Thanks to this programme, group members became more sociable and gained motivations for their learning. 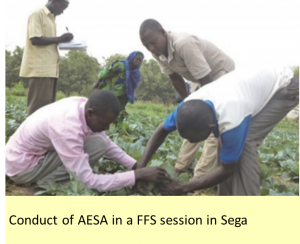 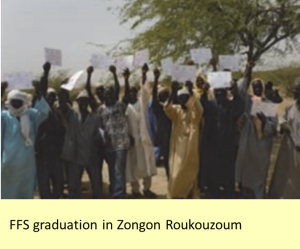 Thus, by implementing FFS, not only appropriate technologies were practiced, but also the empowerment of members was enhanced, and the solidarity among the members was improved.
In addition to strengthening the capacity of the members, this project contributed to reinforce the reservoir management cooperatives so that they were able to implement activities independently.

3. Training of farmer-facilitators and establishment of project management system 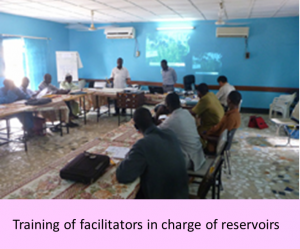 Table 2. Overview of the Project’s Accomplishments

The technical manuals used for the trainings are available from the links below. These may be applied to other countries especially those in arid and/or semi-arid areas.