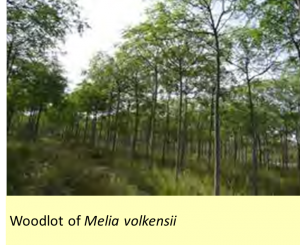 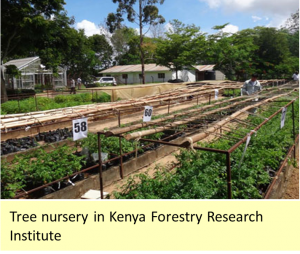 Aiming to establish a production system of excellent seedlings of indigenous tree species, Kenya Forestry Research Institute (KEFRI) and Japan International Cooperation Agency (JICA) implemented “PROJECT ON DEVELOPMENT OF DROUGHT-TOLERANT TREES FOR ADAPTATION TO CLIMATE CHANGE IN DRYLANDS OF KENYA (2012-2017)”. The purpose of this project is to develop drought-tolerant native species, Malia volkensii and Acacia tortilis in particular, to contribute to the promotion of productive forestation for various uses. 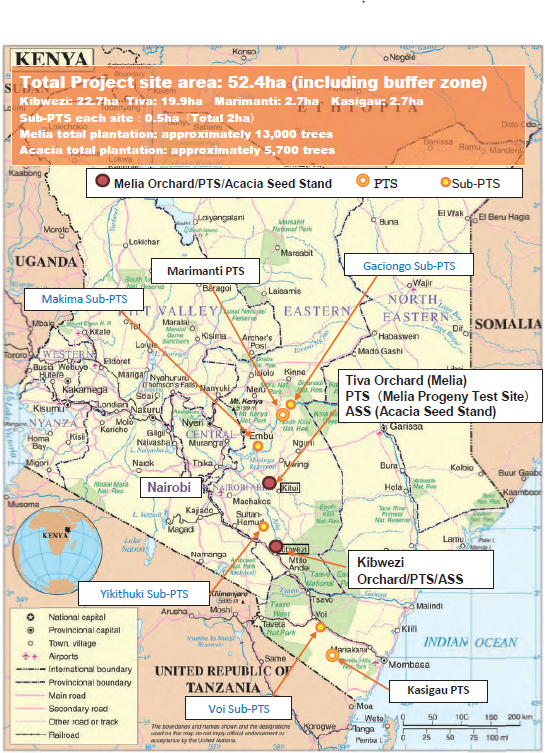 In Kenya, the arid and semi-arid areas (ASALs) account for 80% of the country’s land area and the forest area occupies only 7%. Recently, immigration of farmers from other areas into the ASALs is accelerating the degradation of forest resources and soil, affecting the people’s livelihood that is heavily dependent on these natural resources. In addition, Kenya is considered to be one of the countries most affected by climate change, and development of commercial tree species which can adapt to the change in environmental condition is needed to prevent further deforestation and soil degradation.
In ASALs of Kenya, two indigenous species Melia volkensii and Acacia tortilis are considered as the most important trees because both are fast growing and can be used for multiple purposes.

2. Importance of Melia volkensii and Acacia tortilis in ASALs 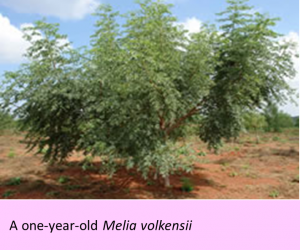 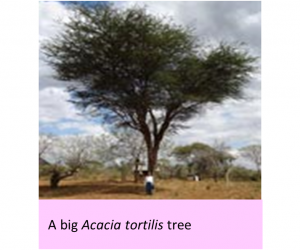 Melia volkensii, known locally as Mukau, is an indigenous multipurpose tree species endemic in the ASALs of Kenya. People say “Mukau ni pesa” (Mukau is money) because this tree has very good hard timber that can be sold at a high price. Melia volkensii is also tolerant to drought and termites, which makes it ideal for the arid climate where other tree species adapt poorly. However, its capability for natural seed germination is poor, hence population of mature trees is less despite the species’ suitability to arid areas. It is for this reason that the scientists at KEFRI undertook research to find easier ways for the farmers to propagate its seedlings in large quantities. This research has been going on since the 1990s and the scientists have now made a breakthrough.

Another indigenous tree species, Acacia tortilis, is also an important tree in ASALs. It can tolerate strong salinity and seasonal waterlogging and adapt to drier and more severe areas where even Melia volkensii cannot survive. It provides good fodder and raw material for charcoal. Also, its twigs, branches, and thrones are used as fencing materials.

Under this project, technical assistance on advanced genetic analysis was provided by Japan to develop the breeding system of Melia volkensii and Acacia tortilis. After the selection of plus trees (superior trees) from the distribution areas of these tree species in Kenya, DNA analysis was conducted to see whether they were genetically superior to other trees or not, because tree growth is affected not only by environmental factors but also by genetic factors.

As the result of the project activities, two clonal seed orchards of Melia volkensii in Kitui and Kibwezi have been established. Seed production from there had started and 4,900 kg of fruits were produced in 2016. 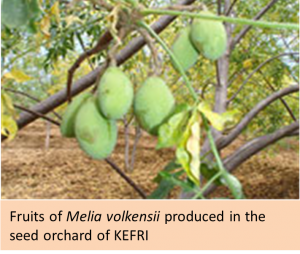 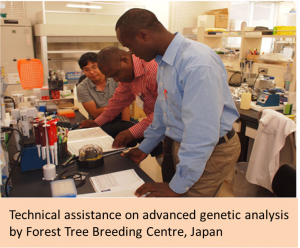 ・[ENG] Guideline on Production, Distribution and Use of Improved Melia Seed and Seedlings in Drylands of Kenya

・[ENG] PROJECT ON DEVELOPMENT OF DROUGHT-TOLERANT TREES FOR ADAPTATION TO CLIMATE CHANGE IN DRYLANDS OF KENYA, Completion Report 1/4, 2/4, 3/4, 4/4